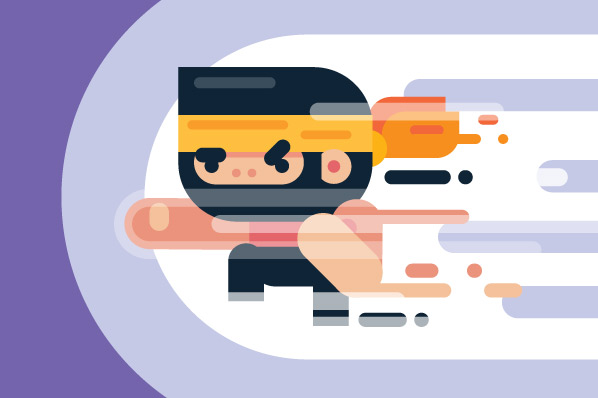 Thanks to their great animations, good games can evoke excitement and feelings that can otherwise only be experienced in a real-life and death situation. Take this action sequence from below for example:

You’re exploring an old dungeon when a sudden metallic sound behind you makes you turn around. You look with horror as the undead knight charges you with astonishing speed. In a few milliseconds that you have left you press the block button. Your character brings up his sword in a quick and masterful movement that makes you feel like a true swordsman. You hold your breath as the fight continues like a dance that is beautiful and lethal at the same time.

You felt scared cause the undead knight’s charging speed and animations reminded you of charging bulls and the fluid way your character moved his sword in defense was just like how Hollywood heroes fight.

You might think that creating animations for games should be just like animating anything else. It uses the same principles and techniques, right? And don’t they use the same software for it anyway?

The answers are “no” and “not even close”. In this post, we’re going to talk about the differences between creating animation for games and let’s say an animated feature movie. Playing a game and watching a movie is not the same, so why should their animation creation process be the same?

To find out more about game art design as a whole, please refer to this post.

In an animated movie, animators have engineered characters’ movements and actions long before you press play. However, in a game controlling the camera and actors in the players’ job, and brings up the issue of responsivity in-game animations. In reality, there is a delay between when you decide to do something and when you actually perform that action using your body.

And so, there should also be a relation between the time when players press the jump button, and when the game character is actually in the air. You might think of this gap as “lag” and aim to reduce it to make the game more “responsive”.

But that’s not the case. It’s all about balancing between responsiveness which is a gameplay principle, and “anticipation” which is an animation-specific principle.

In non-game animations, artists may prolong anticipation as much as they like for various reasons such as building suspense or emphasizing a certain action. Anticipation is also necessary for video game animations, without it, movements will feel fake and without weight.

However, artists must juxtapose the anticipation with responsiveness. If anticipation takes more than a few milliseconds, players will die a hundred times at level one and quit your game because they can’t “respond” in time to the action on screen.

So you must experiment with your animation until you can feel that there is a nice balance between responsivity and anticipation.

In the world of pixels and screens, the concept of “dealing damage” belongs solely to video games. The physics of the real world allows you to potentially deal a lot of damage to anybody or anything in a blink of an eye. You might break a door in a single 5-millisecond motion if you kick it the right way. The same is not true for animating games.

In video games, animation duration has a direct relation with the quantity of damage for both players and NPCs. Powerful attacks must take longer to execute than light attacks. There are two reasons behind this, one is related to gameplay, the other to aesthetics

Gameplay-wise, it makes sense to give the players (and NPCs) more time to detect and dodge the most powerful attacks, and less time to handle the light attacks. Players can receive multiple light attacks before they lose, so it’s okay if they can’t dodge all of them. But they might die with a single power attack, so the animation must “warn” them of the incoming hit.

This is a technique for exaggerating movement in a certain direction by squashing or stretching parts of a figure or object (such as a bouncing ball). A figure jumping up, for example, can be stretched vertically throughout the rapid part of the jump to emphasize the vertical, but compress at the peak of the arc and again on collision with the ground.

In an ideal world, the object’s total volume would be conserved. Thus if we stretch a ball vertically, we must also squash it horizontally.

Because of the additional memory burden (storing position, rotation, and scale is costly) and the rarity of cartoony games, many video game engines do not enable the scaling of bones unless expressly requested.

This principle is important even when posing non-deformable rigs. Because the theory of characters stretching and squashing their poses comes into play whenever characters perform fast actions. Even if the models aren’t scaling, by extending limbs to accentuate stretched poses, such as during jump takeoffs and landings.

Please mind that this particular issue only relates to 3D game animation.

Artists can be tempted at times to add too many frames to their animations sometimes. But it’s best not to over-flourish your animations. Using too many frames hurts the game performance and can also ruin the timing and tone of a character.

It’s better to limit the number of frames and just use a good smear instead, to ensure the impact of the movement isn’t lost. However, that will make the game world feel static and lifeless.

That is why every experienced 2d game animator knows they have to make everything bouncy, even if they are standing still. Although you’re practically moving still images, the human eye works in a way that helps you to create the illusion of life. To accomplish this, make sure to create your 2D characters piece by piece, so you can move each part individually.

Game Animation Has its Own Pipeline

In other fields of animation production, Character Leads, Supervisors, and Directors may review your work and provide you with a great deal of useful feedback. However, in the game production pipeline, you’re likely to have a tighter review process and a limited amount of passes before you complete your work.

You’ll need greater confidence and initiative to continue forward with your animation knowing that feedback/direction may not arrive until much later.

When animators are working on a game project, we expect that they strive for outstanding performances. Animation optimization goes a long way toward making the game run as smoothly as possible. However, performance in that manner doesn’t concern people working in Disney or Pixar.

Moreover, the game industry is very team-based, more so than any other industry. In the pipeline, everyone depends on everyone to get their job done, otherwise, the entire production might be hampered. Not only that, with game animations your involvement doesn’t end when you hit export out of Maya.

Gameplay may change through implementation and iteration so you need to adjust your animation. Or you may need to work together with a mechanic designer to increase optimization.

Interested to know more about the game production process? We have just the thing for you.

Animation Can Lock the Gameplay

Unlike any other form of media, in games, the audience controls everything. Players control every movement, and every experience, just the way they want. It’s more important to make them FEEL those moments through controller inputs and motion output rather than through inactive segments of storytelling.

gameplay-animation synchronization is especially in genres such as Beat’em Up or Hack and Slash, we have the concept of combos. The player’s game character has access to different skillsets to attack (such as kick and punch). And each skill comes with its own set of animation.

But we’re talking about games, and players love to mix things up and mash buttons. When they switch from kicking to punching, we can’t just stop the kicking animation and switch to punching on the spot. That will look and feel very natural, resulting in players’ dissatisfaction and game animations that feel clunky.

What this means in game animation production is that the animator must work closely with the game designer. Punch animation must “lock” the controller and gameplay until the player’s character has finished its movement. Punch or kick animations may take just a few milliseconds. But it’s still very important for movements to be believable, and that’s a major concern for game animators.

When two different sets of gameplay actions overlap with each other, most games use “in-between animations” as filler for this “gameplay lock” time. If you’re shooting with your gun and press the sword slash button, your character will take a moment to holster his gun before executing the next move.

Game Animations Are Created in a Game Engine

A game engine won’t give us a video output that we can see on TV, Laptop, or big screen. Similarly, an animation render engine cannot produce a playable game. Once upon a time game animators used the same tools as any other animator, but that time has long passed.

Artists in an animated movie production can virtually spend any amount of time on rendering. Render specialists refine it further and further until they’re satisfied with the results. But, the goal with game animations is to render graphics in real-time inside the game engine.

This poses different challenges for game animators and movie animators. So, people have developed different tools for both according to the specific needs of animators to make their lives a lot easier.

Even a veteran animator of Pixar has to spend some time learning the ropes with animating inside a game engine before they can get hired by Ubisoft.